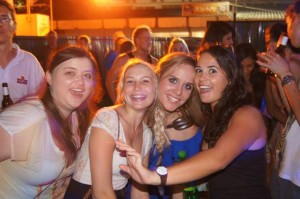 Even though Chiang Mai became famous for its noble and culturally significant history the city is also home to an upbeat and fast paced nightlife. Chiang Mai’s unique layout makes the city ideal for travelers. Over the years Chiang Mai has become an increasingly modernized city and boasts a wide range of upmarket restaurants, great Thai food and quite notably many clubs and great bars.
From Zoe in Yellow (where all the tourists are) to Monkey Club, warm up and JJ Market one thing is for sure,you can party hard in Chiang Mai.
Though it’s not quite as wild as Patpong and Soi Cowboy in Bangkok. Chiang Mai’s very own Loi Kroh Road and its surrounding area is home to local Go-Go Bars, massage parlors and strip clubs. The road links up to the Chiang Mai Night Bazaar and is conveniently close to the old city, if you want to see Muay Thai Fighting in Chiang Mai, Loi Kroh Road will cater for you.

Zoe in Yellow, the central bar in the old city, Zoe in Yellow is the center of a complex of clubs that will cater for every traveler. The club has two dance floors and a large sitting area you can find the Zoe drinks menu on their website. The party at Zoe in Yellow really only starts picking up at around 22:30 but if you’re in a group and you want to grab a good table it’s best to get there a little early.
Around the corners of Zoe in Yellow you will find a range of other bars that will suit every preference. All the bars around Zoe in Yellow pick up at around the same time and the bars include.

If you like being able to have a seat and light up a “Hubbly-Bubbly” or a “Shisha” Hollywood just might be the place for you, they make a good mojito, and though the dance floor is small they play great EDM music inside.

A fairly large dance floor and nice seating area this bar plays live music up to 02:00. The music is good and the buckets/fishbowl drinks are potent.

If you’re a rock fan and you love seeing some good live bands with a beer in hand then Pentatonic is for you. Entrust TEFL students have often dubbed Pentatonic’s band as their “new favorite live band.”

Zoe Kebabs, a small Turkish Kebab stand to the left of Zoe in Yellow’s closed dance floor is a fantastic place for a pit stop on the go. The meals are cheap and no one can fault them on taste.
Eventually when Zoe in Yellow and the surrounding clubs start closing shop you might find that you are still up for more. Not to worry. Within walking distance of Zoe in Yellow, right next to Chiang Mai’s historical mote you will find the Van Bar, Spicy Club and Bangkok bar, all of which can get wild and are open till sunrise.

Comments are closed, but trackbacks and pingbacks are open.

← Chiang Mai Attractions | Things to do in “The Rose of the North”
→ Huay Kaew Road | Chiang Mai
Loading...
Loading...