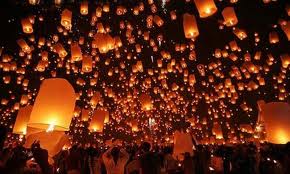 The Festival of Loi Kratong in Thailand

Loi Kratong is one of the most beautiful festivals in Thailand and takes place on the day of the first full moon during the twelfth month of the lunar calendar, which is usually in November.

The word ‘loi’ means ‘to float’, while ‘kratong’ refers to the vessels which are used in the celebrations.

The kratongs are fashioned out of a slice of a banana tree trunk or a hollowed out loaf of bread.  These are then decorated with ornately entwined banana leaves, topped with flowers, incense sticks and candles. Sometimes a few strands of hair or fingernail clippings are placed in the kratong to symbolise past transgressions and negative experiences.

At a set time during the festival, these highly decorated kratongs are released to float down river in a floral tribute to the life-giving water goddess, Phra Mae Khongkha. Each participant sends a wish along with the vessel, as well as all bad thoughts and resentments they may be harbouring. 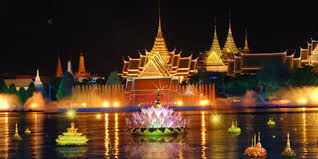 Releasing the kratong symbolises the letting go of negative energies and those who participate are left with a sense of liberation and joy as they watch them float away. Needless to say, celebrations and entertainment follow, and there is even a beauty pageant held to mark the day in some cities.

Usually a grand parade of illuminated water-borne floats is held in conjunction with the release of the kratongs, making for a festive spectacle on the waterfront.

In the smaller centres, sky lanterns are released into the air along with the kratongs, and the combination of twinkling lights on both water and air, against a backdrop of the full moon sky, is quite beautiful to behold.  In Bangkok, airborne lanterns are prohibited, so celebrants decorate their houses and streets with them instead, which is equally effective.

Wherever you are during Loi Kratong, you are sure to be swept away by the feeling of good humour and sense of new beginnings, which pervade this important Thai Festival.

← Loads To Do In Your Spare Time In Thailand
→ Opening the doors on South East Asia
Loading...
Loading...